It has been a year of grief—of missing you. And a year of relief that the “real” you is either released or at peace, gone forever. I’m still not sure which I believe.

It was five years of watching you descend further and further into darkness. Watching you follow your family legacy of alcoholism straight into the grave. And I’m terrified, sometimes, that I will follow in your footsteps. Because dulling it all with alcohol is sometimes easier to do.

You were not always a good dad. You put everything and everyone in front of your daughters, for most of our life. You brushed us aside for what you needed, which was to belong—to be in that club where looks and wealth and popularity and materialism and showing the world that you had “made it,” that you were someone, was vastly more important. You needed that. You needed to prove to the world that your hard work had paid off—that you had the wife and the house and the car and the popular stepdaughter that showed your worth to everyone—to you.

We embarrassed you at times, with our shitty clothes and our shitty cars. We didn’t marry into wealth. We chose to marry for friendship and affection and love instead. And you loved us, but you didn’t really see us.

And then it all came crashing down. You lost the wife. Then the house. Then the car. Then the job. And then her children. Her grandchildren.

And by god if you didn’t finally see us— at 65 years of age, you finally saw what had been staring you in the face but that you had refused to see for all of those years—that you already had a family that loved you. That you had two daughters and two sons-in-law and two grandchildren who had been there the whole time, waiting for you. And that despite your misgivings about us, despite our lack of fancy cars and fancy houses and weekly salon trips, we were well rounded. We were kind. We were intelligent. We were funny. We were loving.

And I hope you enjoyed those few years, because I know we did. We worried about you being alone. Constantly. And we loved you constantly.

The loneliness was too much for you, though, and you got a new family—again. And slowly phased us out, again. And began your final descent. But we kept loving you.

I remember Mom getting so very angry with me—so angry with Kendra—as we tried so hard to continue to prop you up. Why didn’t we just cut our goddamn losses and move on? But she couldn’t. And I couldn’t. And we didn’t. Because you were our dad, and we still loved you. Despite the hurt. In spite of the hurt.

And I hope that somewhere, wherever you are, you are proud of your daughters. For their strength. Their perseverance. Their honor. Their love. Because you really did make it very tempting to walk away and never look back. But love won, dammit.

I hope that you can occasionally still see us. And are proud of who we’ve become. And always, I will love you.
Posted by ALM at 9:14 PM 1 comment:

This year, at some, point, I will be saying goodbye to my dad. It may be this Tuesday, when my sister and I go to meet him for lunch--the first time that we will see our dad in almost a year. It may drag on for months, with phone calls and a few awkward visits. We're both going to try our best to keep it light--to tell him we love him--to not let him drag us into arguments about his perceived hurts, about the fact that we will no longer have contact with his wife--to not let the turmoil of the past year get in the way of what may be our final goodbyes to our dad. Regardless of how it goes, my sister and I have to start learning to say goodbye.

And the hurt is deep--the depths unfathomable. Because he's my dad. He's the guy who I wanted to love me unconditionally, although he never really was capable of doing so--he's the one whose approval I searched for for years and years but never really got. Until I became an adult and got married and had a child of my own, he was the one who I looked to for everything but always came away with little. All my younger self (and let's be honest, older self) wanted was to see him light up with happiness and pride upon seeing me; but it never really happened. My damaged psyche tries to blame myself and say that I was never good enough; but I know that really, he was incapable of giving me enough. He got so caught up in his own damage that he could never move past it to give us what we needed.

And then, he became an alcoholic and withdrew further and further away from us--from our children, from our wishes for a father and a grandfather. He was so injured by his own life that he could never make room for us.

And now, the end is nearing--he is an advanced stage alcoholic with wet brain syndrome, so he's confused a lot of the time as to why my sister and I no longer come to visit him. He has systemic heart failure from an abnormal heart arrhythmia. Did the alcoholism cause it? I have no idea. And the melanoma that he had five years ago has come back with a vengeance and is spreading throughout his body. We knew the cancer was back in November--he and his wife did nothing about it and just got around to seeing an oncologist about it now--and now it's Stage IV. Because he doesn't care anymore. He wants no further treatment. He wants no more of this life. His only wish is that it doesn't go to his brain. But it probably will, unless his heart gets him first.

How do you mend a relationship that is this broken--that is built on this much sorrow? A relationship that never really existed in the first place, outside of two little girls' love and adoration for their father?

And still we love him, despite all of the hurt he has caused us over the years--and so we sit within the unfathomable depths of our sorrow. We talk on the phone for an hour every night and cry, my sister and I, wishing it was different--wishing that he was a father who adored us and wouldn't, most likely, go to his grave harboring resentments against us--wishing he would go to his grave feeling loved, and us feeling his love in return. We wish our grandchildren asked about him--were interested in spending time with him. We wish, we wish, we wish....

We wish it was over. We wish it could all be done over. We wish it wasn't ever this way to begin with. We wish we could change it. We wish him peace. And love. We wish for strength. And for the wisdom we need to navigate our way through this, to find our way back from the depths.
Posted by ALM at 8:48 PM No comments:

Cold as a Razor Blade

I have started this post and erased this post over and over again. Because I don't know what to say or how to say it.

I've been estranged from my dad for almost three months. It's a hurt that is inside me constantly. I don't talk about it with anyone, really, other than my sister--sometimes my husband.

So what's the point? I'm still right where I was before, even if you hear the whole long, drawn out story and even if you did think I did everything right. I'm still missing my dad. I'm still so hurt.

I've written this post five times now and erased it. I don't know how to express the hurt I have. The anger I have. The fear I have. The sadness I have. I am crushed. There's really nothing to say, is there?

I hate the Elf on the Shelf a whole lot--and my daughter at age eleven, HAS to know it's me, right? I'll realize, in a panic, when it's bedtime, that I haven't done a damn thing with the elf. 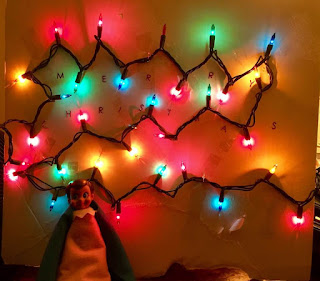 Dear Liberal Friends: Hillary is not going to suddenly be declared the victor because of recounts in a few states. The people who make up the Electoral College aren't suddenly all going to grow a conscience and vote against Trump. The Republican controlled Congress isn't going to use the 25th Amendment to declare Trump unfit for office, nor are they going to impeach him. And if they did, we'd get Pence as POTUS and probably Sam Brownback as Veep.

As much as I just want to hide for the next four years (please, god, it can't be EIGHT, right???), THIS. IS. HAPPENING. On January 20th, the shit-flinging hate monkey will be sworn in. So stop your fantasies and stop trying to hide under the bed. This is real, and we have to do all in our power not to lose everything that was gained in the past eight years. Write letters to the editor. Put your congressional representatives on speed dial. Call out the racist/homophobic/misogynistic/xenophobic people who did this. (If you're terrified of confrontation like me, you can even be polite about it with something along the lines of "I don't share your views. Please stop talking.")

Love each other. Look out for each other. We still might lose everything. But we have to try. And then, if all else fails, we move to Ecuador. Or Sweden or something. We'll figure that part out later.

But for now, fight.

On the Friday night after Thanksgiving, I got a phone call that my father had fallen down (again), was unconscious (again), and was being rushed to the ER (again). By the time I got there, he was trying to check himself out against medical orders for the third time in as many weeks. The doctor was furious.

As you may know, it's impossible to reason with a late-stage alcoholic, so my sister, stepsister, and I triggered an involuntary commitment. In between his alcoholism, heart issues, and recurring melanoma, he's not in a very good place mentally. So getting him committed against his will wasn't real difficult procedurally but it was devastating emotionally.

Thus far, they've held him for a full 24 hours past the mandatory 72 hours and have told us that they may keep him for up to two weeks. He hung up on me when I called him on Saturday, and then he informed the hospital that he would refuse to take any calls from me and my sister from this point on. He has also forbidden the therapists working with him to contact us.

So, my sister and I have been disowned spiritually (there was nothing left to "own," physically). I cycle back and forth between rage and grief and lots and lots of depression, but I don't know what else we could've done at this stage, and I don't regret it. He is going to die. Probably soon. At this point, I have no idea of whether it was better to keep on standing by and watching it while doing nothing or trying to at least prevent him from further harm. No one can take care of him anymore without help. And now, the result is all the same, in that I've most likely lost my dad for good.
Posted by ALM at 7:23 PM 1 comment: