Here we are, on Day 36, while BP and the Coast Guard are allowed to threaten reporters with arrest for trying to cover the story. Day 36, and BP boats have been allowed to sit by idly, despite repeated requests for help from local officials, while oil flows into Barataria Bay.

Here we are on Day 36, and BP is just now getting around to trying the "top kill" method to shut down the well. People down here would really like to know why it took 36 days to get to this point. 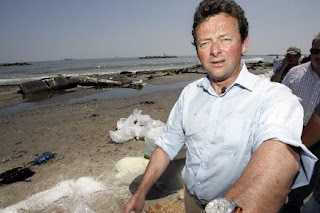 Pressure to Save Time, Money may have Contributed to Oil Disaster
[F]ive weeks after the Deepwater Horizon blowout that triggered the oil spill in the Gulf of Mexico, there is mounting attention being paid to whether concerns about money created an atmosphere of haste that--even more than broken gadgets, buckling cement or faulty plans--may have led to the disaster.

Even before the Deepwater Horizon drilling rig went down in flames, BP's ill-fated exploration well in the Gulf of Mexico's underwater Mississippi Canyon had been consuming time and burning through money.

I must admit, I don't get it. I'm friends with lots of you. I'm family with many of you. I love you. But I just don't get it. This post is going to piss you off--but if you can stand it, try reading another point of view.

Why were the eight years of the Bush administration okay and now, all of a sudden, you're in such dire fear of our country falling apart? Are you aware of how concerned we lefties were during the Bush administration? What, really, has Obama done so far to make you fear that you're going to lose your rights to bear arms? (By the way, I say this as a woman with a pistol in the top shelf of my closet, who also voted for Obama. ) Yes, I'm a progressive who also believes in the right to bear arms; although as I've said before, I think we're carrying it a bit too far these days. Is it really an infringement on your Constitutional liberties not to be able to buy a semi-automatic rifle? Do you really need that to kill a deer?

*I wonder how many hits the mention of the word sperm will bring to my site via the Google.

Google Search of the Month

Note to self: do not, under any circumstances, move to Texas.

Among other gems like now referring to the slave trade as the "Atlantic Triangular Trade," the Texas Board of Education will also now require that the U.S. government be referred to as a "constitutional republic" rather than as "democratic."

You morons. Were you jealous of Arizona or something?

I, along with quite a few New Orleanians, I think, have a few reservations about your choice of Ronal Serpas for police chief. He may be a little too old-guardy, a little too entrenched in the way things were done before, without even getting into some of what's been unearthed regarding his days at the NOPD.

However, I would like to commend you for two excellent jobs well done, at least in my book, during your first couple of weeks in office.

First, I thank you from the bottom of my heart for getting rid of all of those ridiculous, annoying, "Our Recovery in Progress" signs that were spread throughout the city in what was obviously an attempt at nothing more than self-congratulatory PR for C. Ray, since those signs almost invariably spotlighted some minor public works project that had absolutely nothing to do with the aftermath of Katrina and the Federal Flood. Could anyone explain to me how minor sidewalk patching along Audubon Place helped the recovery effort in any way, shape or form? I realize, Mitch, that you may have just had these signs removed to replace C. Ray's name with yours. But I'm going to take you at your word that we're no longer going to say we're in the recovery phase and are now going to move on to the creation phase.

Secondly, I would really, really, really like to thank you for demanding an apology from this jackass. I'm sure the apology was forced by his boss and was in no way sincere, but still, what an ass. How can you live in New Orleans for six years and then spout that kind of ignorant crap, even if you DO work for Fox? Chris Myers, you unfeeling, racist f*ck, may you and your family never face a natural or man-made disaster and need empathy from others. I hope that there's a special form of karma awaiting you.

"We will do what it takes. We will stay as long as it takes to help citizens rebuild their communities and their lives."
President George W. Bush, September 15, 2005

"Your government will do whatever it takes for as long as it takes to stop this crisis."
President Barack Obama, May 3, 2010
Posted by ALM at 3:38 PM No comments:

As a resident of Louisiana, I'm so sick about this oil spill that I can’t even begin to tell you.

BP is still sticking to its initial “guesstimate” that approximately 5,000 barrels a day of oil are spewing forth into the Gulf, despite numerous reports saying that the real amount of oil being released is more likely in the range of 56,000-80,000 barrels per day. Even if you go with the lower estimate of 56K barrels a day, that means more than 2.3 MILLION gallons. A day.

BP’s CEO, Tony Hayward, has had the gall to try to downplay the damage being caused to the Gulf. "The Gulf of Mexico is a very big ocean. The amount of volume of oil and dispersant we are putting into it is tiny in relation to the total water volume," Hayward said.

But thanks to the “hot tap,” the smaller pipe that BP has shoved into the gaping pipe that is hemorrhaging oil, we’re saved, right? BP is proudly reporting today that the “hot tap” is now siphoning off 5,000 barrels of oil per day. However, as BP has maintained all along that only 5,000 gallons of oil a day have been leaking, and significant quantities of oil are STILL gushing out, this puts them in a bit of a quandary. You can watch a live feed of the oil leak here.

My brother-in-law and his family were in town for JazzFest last weekend, and we spent one of the days they were here just wandering around in the Quarter. It was a fabulous weekend for it--a wonderful breeze blowing in from the Gulf, warm--not hot--weather, Pimm's cups from the Napoleon House, and the most amazing amount of street musicians out that I've seen in a long time in the Quarter.

On just about every street we walked down, there was an awesome musician playing. We saw a group of teenagers who were right up there with Rebirth in their brass band skills. We spent about 30 minutes and $30 in tips watching them. We saw a funky group playing in Jackson Square with a clarinet, a violin, a keyboard, and a drum set.

And then on Royal Street, of course, we saw Grandpa Elliott, whom I love, and who is now a lot more famous thanks to Playing for Change. I had a nice little chat with Grandpa Elliott, and of course, got talked into buying a copy of his new CD. He's quite the salesman. Everyone has seen this video at least a dozen times now, but I still love it, along with the rest of the Playing for Change DVD.