Today was a pretty good day, other than the fact that I’m missing my extended family and wishing they were here. It is E’s first Christmas after all, so we made the best of it. K’s entire family came over, and we started off with mimosas and brunch, followed by a few presents, wine, and a really nice dinner that K and I spent most of Christmas Eve cooking. A good time to be thankful for what we still have and hope for a happier 2006.
Posted by ALM at 11:19 PM No comments: 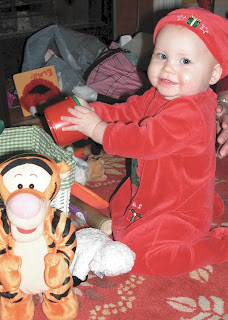 Chris Rose sums it up perfectly:

Mardi Gras is...returning to the same street corner, year after year, and standing next to the same people, year after year -- people whose names you may or may not even know but you've watched their kids grow up in this public tableau and when they're not there, you wonder: Where are those guys this year?

It is dressing your dog in a stupid costume and cheering when the marching bands go crazy and clapping and saluting the military bands when they crisply snap to.

Mardi Gras is the love of life. It is the harmonic convergence of our food, our music, our creativity, our eccentricity, our neighborhoods and our joy of living. All at once.
And it doesn't really matter if there are superparades or even any parades at all this year. Because some group of horn players will grab their instruments and they will march Down the Avenue because that's what they do, and I, for one, will follow.

If there are no parades, I'm hitching a boombox to a wagon, putting James Booker on the CD player and pulling my kids Down the Avenue and you're welcome to come along with me and where more than two tribes gather, there is a parade.

Still haven't had the heart to go into our totaled house, although I need to go over there soon and see if there's anything left that's salvageable. Sooner or later, we're going to have to drag everything out of it and begin gutting it. Not looking forward to that process.
Posted by ALM at 11:18 AM No comments:

E is doing well. She's back in her pre-Katrina daycare and seems happy every day when I pick her up, which is a big relief, as they have an all-new staff. (All of the former staff lost their homes and haven't made it back yet.) They can only staff the place from 8 a.m. to 5 p.m. right now, which makes my work schedule interesting.

She's getting very active--has become a pro at pulling herself up on things. We went and had her picture taken with Santa last week—guess that will be our only traditional pre-Christmas activity, as we've looked everywhere for a Christmas tree and haven't been able to find one. Maybe we can decorate one of the cats or something.
Posted by ALM at 2:21 PM No comments:

Work is surprisingly normal--our building sustained very little damage, other than flooding on the first floor. When you walk into the elevator lobby, you can see where the paint was eaten off of the elevator doors by the flooding. Makes me feel kind of insecure about taking a ride, but there's not much of a choice in the matter, as I'm on the 18th floor. And of course, out of nine elevators in the building, only one is working, so it takes a ridiculously long time to get anywhere in the building with several hundred people all trying to use that one elevator.

No restaurants are open anywhere within walking distance, so we all bring our lunches. No vending machines, so I bring my Coke-fix from home.
Posted by ALM at 3:20 PM No comments:

We’re back in New Orleans and settling into life here again. Things feel somewhat normal and completely abnormal at the same time. Can you say PTSD?

It was pretty eerie when we first got into town, driving through New Orleans East and seeing mile after mile of deserted, lifeless neighborhoods. I cried and cried when we first got here, just overwhelmed and heartbroken by the sheer amount of loss and suffering of so many people. As I'd been told, life in the Uptown/CBD/French Quarter area feels pretty normal--lots of people going about their everyday lives. The area isn't completely unscathed--lots of blue roofs, lots of fallen limbs and lots of debris in the streets. And pick-up of said debris is sporadic, at best. Still, pretty good, considering.

Drive about one mile north of our area into the flood zone, though, and it's a completely different story. It's hard to wrap your mind around 80 percent of the city being damaged by flooding until you're here and can actually see it. The flood area begins right around our former apartment on Baronne Street (before our brief experiment in home ownership), so neighborhoods that I'm well accustomed to driving/walking through every day are in pretty bad shape. Trash everywhere, abandoned cars on the streets and in the neutral grounds, spray paint markings on every building, trees lying on the tops of roofs, blocks that burned down during gas fires, etc. And everything is brown---brown grass, brown muddy streets, brown water marks on the houses.

Some businesses are open, but there are many more that are just big, dark gaping shells. It's depressing and fascinating at the same time, to see the damage done by the flood.

There are so many inconveniences as far as daily life is concerned. Grocery stores close at 7:00 p.m., drug stores and gas stations are few and far between. Fast food restaurants are non-existent, as they can't afford to staff them--not that it's any great loss not to be able to eat fast food, just another weird circumstance when you're accustomed to living in a city that used to operate 24/7. Most traffic lights are still out, so just about every intersection is a four-way stop.

I think one of my least favorite daily activities would have to be walking past restaurants/grocery stores that are in the process of cleaning up after the flooding--I have to walk by one on my way to work every morning that has a gigantic mound of rotting food and other trash blocking the sidewalk. God only knows when it will be picked up. Welcome to life in New Orleans.
Posted by ALM at 2:50 PM No comments: 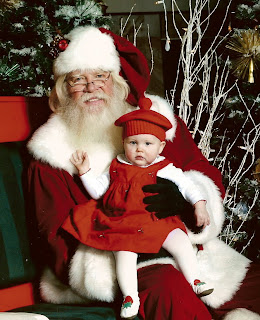 Who is this strange bearded man, why is he holding me, and for the love of God, why are we wearing matching outfits?
Posted by ALM at 3:42 PM No comments: