Pretty soon, I'm going to have to start a heading called "Songs I'm Obsessed With." Here's my latest fixation, "Pride and Joy" by Brandi Carlile. It started the usual way--I heard the song a few times in passing and liked it. Then, someone burned a CD for me with the song on it, and I really listened to it. And it has those two magical qualities that suck me in every time--a singer whose voice fascinates me and lyrics that reel me in.

True confession time--if I could be anything in the world, I would be a singer. Not a big-time singer who can't walk down the street without being mobbed by adoring crowds. No Lady Gaga-type life for me (although I adore "Bad Romance," much to Kenny's dismay). No, I'd want to be someone like Alison Kraus--someone who has an absolutely amazing voice but who isn't that well known outside of certain circles and can probably walk down any street without being recognized and harrassed.

Sadly, I will never be a famous singer, because I really don't sing all that well--smoking a pack of cigarettes a day for 20+ years will do that to you--ironically, I still have the lung capacity to hold most long notes--my voice just cracks all over the place. But that doesn't stop me from singing up a storm in my car. If you're sitting next to me at a stoplight, you'll most likely get a show, if you happen to look over at that crazy girl in the black SUV next to you.

Anyway, because I'm officially now obsessed with this song, I've read what little analysis there is of the lyrics online. It seems that most people think that it's a song about a lost love, but I tend to differ. But that's the wonderful thing about music, isn't it? It can have different meanings for each of us.

Emmeline is six now, so I decided it was finally time to get rid of about six bags worth of clothes she's outgrown, her baby stroller, and the pack-n-play. At the same time, when I dropped them off at the Salvation Army, it was all I could do to force myself to hand the items over to the attendant, when what I really wanted to do was just take it all back home again. Why is it so difficult to let go of baby items, long after the baby has grown up?

If I had room to store them, I probably would have just done so indefinitely. Fortunately, though (or unfortunately, depending on how you look at it), I don't think we could squeeze another thing in our attic. See here for an explanation as to why.

*Because I think you probably know how I feel about this.


From a survey of 574 GOP primary voters nationwide: 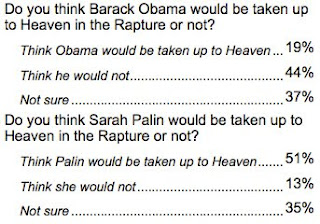 As of today, I have now lost enough weight* that my office chair no longer slides under my desk without the arm rests banging into the desk. Definitely a weird and new experience to have to adjust the arm rests on your chair.

The Equivalent of Eating What?

The Daily Show with Jon Stewart
Get More: Daily Show Full Episodes,Political Humor & Satire Blog,The Daily Show on Facebook
Wow. This is the fine quality programming that Fox has come up with to replace Glen Beck? And, as has been asked on the internets, why is it equivalent to eating a live raccoon? WTF is that about? Because our first lady is African American and therefore must eat live critters? So first your argument is that she would eat a live raccoon and then your argument is that she's elitist because she got her hamburger from some fancy-shmancy place with hand-blended shakes rather than McDonald's? And then you take offense to the fact that oh my God, the First Lady's platform is trying to reduce childhood obesity and she had the gall to eat a cheeseburger?

Oh, Fox News. "The Five" are quite the brain trust, aren't they?