I get it. I know that your political views are about as right-wing conservative as you can get, and I know that that's primarily what your audience wants to hear, as evidenced by the calls you take over the air. I get it. I mean, hell, it's not real hard to figure out--there's no doubt in my mind that you would still be happily broadcasting Rush Limbaugh for 3-4 hours a day if WRNO/Clear Channel hadn't stolen him from you. (Remember when WRNO used to play rock music? That was nice.)

But really, you've been getting a bit excessive in your fear-mongering. Yesterday, you ran a story during the hourly news about the power of self-healing. The basic gist of the story was that if you bang your shin into a piece of furniture or something similar and then rub it with your own hand, your mind for some reason makes it feel better, as opposed to someone else rubbing your shin, which would make it hurt worse. A very innocuous story. But you guys couldn't just air a little fluff science story without getting a jab in there. The lead to the story by your news guy (whose name escapes me) was "Worried about what it's going to cost you now that Obama has enacted his new health care mandate? Here's a story that might help you save costs." Really? You turned a story about self-healing into a jab at health care?

Today, the same news guy intro'd a story about BP's oil by saying that some scientists are still insisting that there's oil in the Gulf--it's kind of like you're implying that all's well, the oil really has disappeared, nothing to see here, move along, everything would be fine if those effete liberal elitists who work at universities and such weren't insisting that the oil was still there.

You guys are ridiculous.

Note to self: Renew subscription to Sirius.

P.S. Clear Channel, you're just as bad. Could there be a more vile, racist show than Walton and Johnson in the morning? Every time I tune my channel to 95.7, I can last about 15 seconds before I'm completely repulsed by the latest shit they're spewing.
Posted by ALM at 4:50 PM No comments:

Ode to the South

I'm in Seattle right now, at a conference on global health. What can I tell you about Seattle? It's so clean here. So green here. So walkable. So Pacific Northwest. Temperatures in the 60s, which feels like a godsend, considering our unrelenting 90+ degree heat in New Orleans.

It took me 12 hours to travel here yesterday. Apparently, it takes less time to travel to Peru from New Orleans than it does to travel to Washington State. And last night, I had a really weird dream where I decided to turn around and fly home for the night and was then in a panic, trying to figure out a way to get back here again in time for the conference this morning.

Did I mention that I can see the Space Needle from my balcony? The balcony which, by the way, I can't smoke on unless I want to forfeit a $250 deposit. (Don't tell anyone, but I've snuck out there a couple of times and smoked anyway. And yes, I recognize the irony of the fact that I'm sneaking cigarettes on the balcony while attending a global health conference.)

Google Search of the Month

Oh, you people on the google. You never cease to entertain me. This month's search? "What are the chances of a live bullet going off if hit by a lawn mower?" I don't know. What are the chances? And why would you have live bullets lying around in your lawn?
Posted by ALM at 9:31 PM No comments: 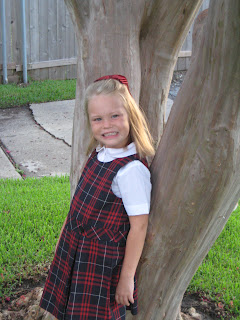 Emmeline's first day of kindergarten. It would have been completely anti-climactic, as she spent a year in Catholic pre-K last year and we had planned to send her back. But we got a call over the summer, saying that there was an opening at one of the charter language immersion schools, and after much agonizing over the decision, we decided to enroll her there.

I was worried that it would be difficult for her, as she really loved her other school. But my daughter has proven once again to be amazingly adaptable and has finished her first week with no problems. She seems to have already become completely comfortable in the new school, which is a big relief.

I'm amazed at her ability--at any young child's ability--to learn a new language so quickly and wish I'd had the opportunity to do so when I was a kid. She already knows the French words for the primary colors, as well as for man, woman, boy and girl. So basically, her French vocabulary is already larger than mine.

I still don't have a clue as to how this whole language immersion thing will work in the long run. I mean, how do I help her learn how to read when I can't read the language myself? (I know, I know--I just focus on the reading in English part.) But still, it will be very strange to not be able to help her pronounce a word correctly, as I long ago realized that I'm incapable of speaking French properly. Spanish I can do. There's just something about French that is impossible for me--ask my French-Swiss co-worker or my Belgian boss. (Although it did become much easier for me to even attempt to pronounce a French word when my Francophile co-worker pointed out to me the biggest differences between English and French--English is primarily pronounced with the tip of the tongue and the front of the mouth, while French is primarily pronounced with the back of the tongue and the mouth. I don't know why that had never occured to me before.)

Anyway, I'm already dreading Emmeline's teenage years, when she will be capable of calling me horrible things, and/or discussing her plans to get a belly ring and tongue piercing, and/or making plans to sneak out of the house, all directly in front of me, as I will have no idea of what she's saying.

But I'm glad she's happy, and I'm glad that she has this opportunity.

*Thank you, Google translator!
Posted by ALM at 9:44 PM 2 comments: