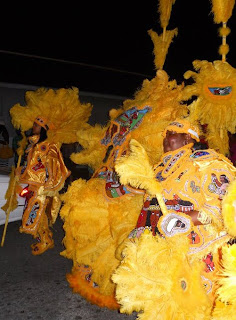 For the first time since moving to New Orleans, I went to "chase Indians" with a group of friends last Saturday night for St. Joseph's Day.

There wasn't much chasing involved, as it turned out. We didn't have to do much other than stand around near the corner of Dryades and Third Streets, with tons of other people, and wait for the Indians to come to us.
And come to us, they did. Tribe after tribe, each Big Chief's costume as elaborate and beautiful as the one before it. It's amazing to me that we have people in this city so willing to dedicate as much time, effort, and money as it takes to make one of these gorgeous, awe-inspiring costumes. It was definitely one of those "only in New Orleans" kind of nights. Pretty, pretty. 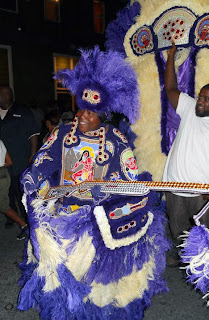 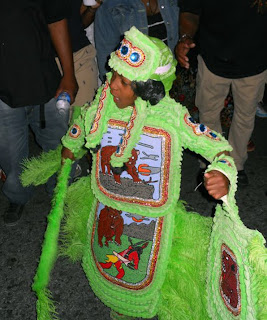 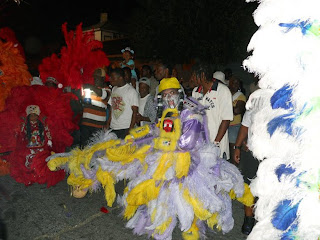 Dear Members of the Press:

Since we've decided to bomb Libya and all, do you think maybe we could all agree on how to spell Khadafi? I swear, in one news program this morning, I saw it spelled at least three different ways. Is it Khadafi or Gaddafi? Or Qaddafi? Moammar or Momar? It's like the whole Osama/Usama thing all over again.

Maybe we could, I don't know, ask him how he'd like his name spelled? Or check his driver's license or something?

I don't recall anyone having this problem with Hitler.

Sincerely, A
Posted by ALM at 9:29 PM No comments:

All on a Mardi Gras Day 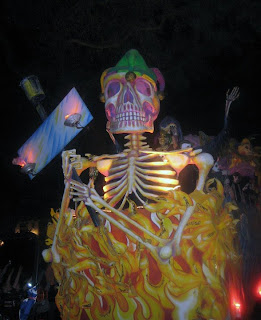 It's over. Again. Thank God. Every year, I'm so excited about Mardi Gras arriving that I can't stand it. And every year, by Ash Wednesday, I'm incredibly relieved that it's all over. And exhausted. And tired of purple, green, and gold. This year was no exception, and I think I lost even more brain cells this year than usual. I blame it on being middle-aged. (In dog years, I'm 287.) But it might have had something to do with the fact that I went to every single parade, with the exception of Bacchus & Endymion, which just seemed like too much of a good thing (i.e., an insane amount of people fighting over beads and the neutral ground). And I missed one day parade on the first Saturday. But other than that, I was at Every. Single. Parade.

And now it's over, and I'm glad. And I will start being ready for more parades in about 9 months....

Highlights of this year's season, I think, included running into some acquaintances in the Quarter who invited us to watch Krewe du Vieux from the balcony of a friend of a friend. No one mentioned that said friend's friend owned 18 cats, all of whom were housed inside of her 300 square-foot apartment and apparently used the entire apartment as one giant litter box. I've just about gotten the smell out of my nose. But watching K du V from a balcony (with lots of fresh air) was definitely a new experience. Not quite the same as watching it from the street, but fun anyway. And then afterwards, cat lady pulled out several bead bags overflowing with old beads, so we had fun chucking those to people on the street. At least, it was fun as long as you didn't put the beads too close to your face while throwing (see cat pee, above). I threw to middle-aged men and women and had great fun ignoring the usual 20-somethings who love to lift up their shirts in between bouts of throwing up in the street.

As usual, by Mardi Gras morning, when I was getting up at 6:30 a.m. to get out to St. Charles Avenue, I was pretty much done and questioning my sanity. But after a couple of milk punches, everything seemed much better. And then the Buzzards came by, and I got to say hello to my husband. And then Rex rolled by, and I caught one of the stuffed masked captain throws they gave out this year, and Emmeline was thrilled. And then Kenny got back from marching with the Buzzards and we watched the noisy, excessive, but-the-kids-absolutely-love-them truck parades. And then, on the way to our friends' house for dinner, we ran into some Mardi Gras Indians. And it was, as usual, a perfect Mardi Gras day. 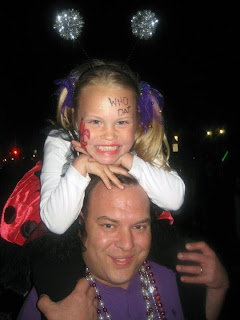 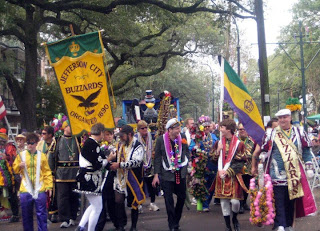 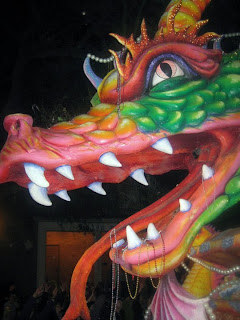 My favorite costumed group from Mardi Gras needs no explanation. Ladies and gentlemen, I give you the Bieber patrol. 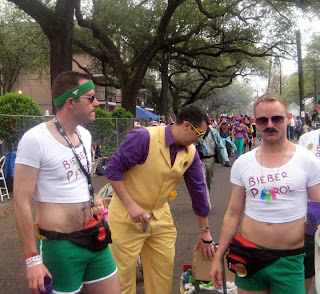 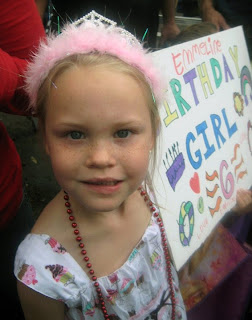 It's official. Emmeline is no longer--in any way, shape, or form--a baby. She is a "big girl" of six years old. And has already begun informing me of all of the things she can do now that she's six, repeatedly.

And because I endured 41 weeks of being pregnant during Mardi Gras 2005, she got to reap the rewards this year by having a birthday during Mardi Gras weekend. (The big year will be 2014, when she turns nine on Mardi Gras day.)I'm definitely not complaining, as this made party planning this year a cinch. No horrors of the hidden costs involved in hosting a birthday party at City Park. (Last year, I forgot about the part where we'd have to buy ride bands for the parents, too, as their children weren't old enough to ride anything by themselves. Shudder.) Nope. This year, our party preparation list was considerably shorter. Birthday cake? Check. Beverages, both adult and non-adult? Check. Camera? Check. Parade? Check, check, check.

Not surprisingly, not many of her friends came. I'm guessing it had something to do with the fact that a) the forecast started calling for rain on that day about a week beforehand; b) due to that forecast, Iris and Tucks ended up shuffling around and moving up their parade times; c) it did rain; and d) you couldn't really call it a rain--more of a torrential downpour.

The good news was that the rain held off until about 30 minutes before Iris rolled by us, and it didn't get really, really bad until about 15 minutes before the end of the parade. And then it rained so hard that all of us stood around in it, laughing at how wet we were, and trying to salvage what was left of the cake. And Emmeline had the time of her life.

All in all, it was a birthday to remember. Happy Birthday, pretty girl. 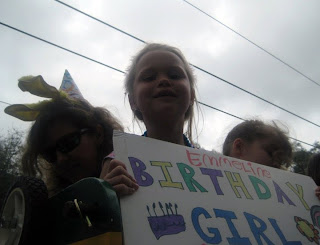 Mardi Gras Through the Years

Okay, I need my daughter to stop growing now. She'll be six on Friday and is very excited that the City is throwing parades in her honor. 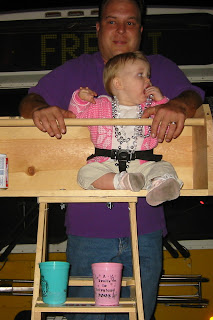 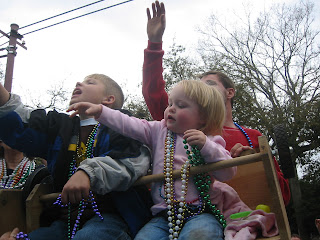