The City That Can't Forget Crime

New Orleans crime. It's on everyone's minds. At least, everyone in the New Orleans blogosphere. Clay. Eli. Maitri. Liprap. Amy. And too many others to count.

I picked up the Times-Pic yesterday and opened it to the metro section first, as I always do. I was immediately struck by the headlines. Of the 12 headlines, 8 of them referred to violent crimes committed in the city and surrounding parishes. "Juvenile court judge says 14-year-old Kenner boy can be held in killing of French Quarter bartender. "Son accused of killing father, beating mother." "5 wounded in shootings at Iberville." "Trial delayed for mother accused of arming son." Eight out of 12 of those articles. And if that wasn't bad enough, one of the articles of the remaining four was a report of a man being arrested for sexually molesting an eight-year-old girl. All of the letters to the editor were from people voicing their anger, their fear, and their disgust at the sad state we're in.

Labels: Keeping the Brand Out There, New Orleans

Conversations With a Three-Year-Old, Volume 8

Me: Okay, that sounds great.

Labels: Conversations With a Three-Year-Old, Mom Blogging, My So-Called Life

Well, that was a rough couple of weeks. I guess I had it coming, since work was incredibly slow during the entire month of December. I think I may have just made up for it, though, after the time I've had at work since getting back--V, a friend and co-worker, informed me on January 5th that she'd decided to go ahead and submit that research grant application after all. It normally takes about 4-6 weeks to prepare a federal grant application--we did this one in 9 days, with 7 whole minutes to spare before the FedEx guy showed up for the last pick-up of the night. I may or may have not cried a couple of times before it was all over. But thank god--it's DONE! And now I can do all of the other work that I've been neglecting for two weeks and that people are on my ass about! Yay, work!

And Emmeline has another infectious ailment and can't go back to school until some time next week. Ah, motherhood.

There were some positives over the past couple of weeks, too. First, K and I hosted a baby shower, along with some other friends, for a couple of our dearest and closest friends. A good time was had by all, I think, especially at the after-party. Who knew conversations involving Suze Orman and Fred Flintstone could be so entertaining?

The other plus is that I'm getting a raise! And a promotion! To management! And a new office! With a window! And a door! That's not a cubicle! Can you tell how excited I am?!? And, in the typical lightning-quick speed that accompanies all staff decisions at my job, all of this should go into effect by April! Or May! Not as excited now! Oh well.

And finally, is it just me? Because I think all of the people at 20/20, Dateline, the local news, etc. are just a wee bit disappointed with having to report the whole story of "A bunch of people were on a plane that crash-landed in the Hudson River! And they're just fine! And did we mention there were geese?!?" Right now, 20/20 is running a special on how the crash could have been much worse!!!!! They could have died, people! And there were geese! GEESE, I tell you! Be afraid!*

And that concludes yet another exciting Friday evening in my world. Watch out for geese.

*Sorry for all of the exclamation points!!!
Posted by ALM at 8:46 PM 2 comments:

Why I Fear Winning the Lottery 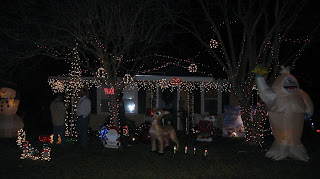 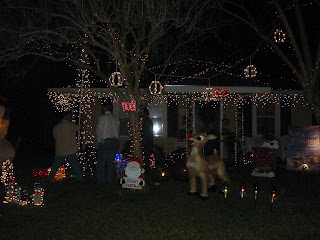 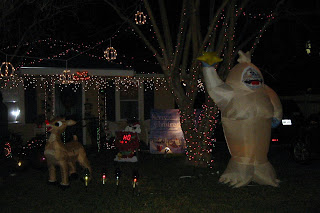 Yes, my husband loves Christmas lights. He thinks that everyone's house should look like Al Copeland's at Christmas. For the first, oh, ten or so years of our relationship, I fought this love K has of the "more is more" school of Christmas decorating. Then, I let him do it and got mildly embarrassed when people would come by the house.

This year, I just accepted that my yard was going to look like this. It's even my fault, a little, as when K first got started decorating, all he had up was the Abominable Snowman, the icicle lights, and one Santa. My response was, "If you're going to go tacky, go tacky all the way--this is half-assed."

Two days later, I came home to the above Christmas wonderland, complete with lights on the roof, two penguins (because nothing says Christmas in New Orleans like penguins), an inflatable Rudolph, complete with flashing nose, and the piece de resistance, the Snoopy Christmas countdown display.

If we ever win the lottery and K has an even larger house, a larger yard, and a larger budget, I am so screwed.
Posted by ALM at 5:09 PM No comments:

Well, thank God--Christmas is behind us. Don't get me wrong--I absolutely adore Christmas. As I type this, I'm sitting next to our Christmas tree--which is about as dead as a Christmas tree can get--and am delaying taking the lights down for another day or two. I love me some Christmas lights. And they have to be colored ones. Yes, yes, I know that some people think that colored Christmas lights are tacky, but so be it--to me they say Christmas. I would prefer colored blinking lights, but K absolutely draws the line at that one. He comes from the white Christmas lights school. Blech. Sorry, but BOR-ing. I'm sure I've now offended all three of the people who read this blog.

Anyway--it seemed like this Christmas went by way too quickly, but at the same time, I'm glad it's over. I guess that's what happens when you host both your and your husband's families at some point during the week of Christmas. (Hi, Mandy!) We had a very good time, but I was exhausted by the time it was all over, with five separate Christmas gatherings, all but one of which were at our house. One on Christmas Eve, one on Christmas day, one on the Saturday following Christmas at my mother's house, one on Monday night, and one on the Tuesday following Christmas.

So, I wanted it all to be a Martha Stewart Christmas--it was the first time that I've seen my mother AND my father AND my sister--all in the same room--on Christmas day--since 1981. And it all went pretty well, I think. Other than the fact that we didn't finally eat until 6:30, because we (or should I say I) decided to cook too many dishes. And then my husband set himself on fire. Not too badly, but nonetheless--having to find a Walgreen's that's open at 11:00 at night on Christmas so that you can go buy burn cream kinda puts a damper on the evening. Note to self--in the future, don't let the husband play with the new chimenea after he's had a few drinks.

Let's see--what else. I realized on New Year's Eve that this is only my second NYE in New Orleans since I moved here in 1998. People, can y'all let the fireworks go just a little bit? Or go down to the river and watch the professional show? The fireworks started around my house at about 5:30 and kept on going until well after 1:00 a.m. As someone who was born and raised in a state where private fireworks are illegal, it got a little old after a while. Of course, I'm usually in Atlanta on NYE, hanging out with my sister and various friends, drinking too much and seeing who can make the most creative hat out of tin foil, so what do I know? I guess I should just be thankful that I didn't end up on the news, a fatality of a stray bullet.

Emmeline got a beautiful baby doll from her Aunt Dorothy and Uncle Sean, her godparents, for Christmas. In keeping with the "what's the weirdest name I can give one of my dolls or stuffed animals?" theme, she named it Hooga. Apparently, Hooga is Myga's sister.

My blog was visited by someone from Wasilla, Alaska. You don't think it could really be HER, do you? (Hi, Sarah!)

Speaking of which, where is Sterling? And hi to whomever is from there that's stopped by here.

I couldn't care less who wins the Sugar Bowl tonight.