Angry, sad, scared. Not much more to say than that.
Posted by ALM at 10:14 PM No comments:

Created by WetBank Guy, one of the great NOLA bloggers. A beautiful tribute on the eve of this anniversary.

We are not all poor. We are not all "sitting around waiting for a handout." We are not all stupid for living here. But even if we were, we are still people. We are still Americans. We are your family members, your co-workers, your friends. And we still deserve dignity and respect, compassion and love.

On the Night Before My Evacu-cation

Onward to the ATL tomorrow. Spent the evening packing up clothes for me and clothes and toys for E, as well as making a list of things for K to pack up later on in the weekend if things look bad. After packing only 3 pairs of shorts and some t-shirts when leaving for Katrina, which didn't come in real handy 3+ months later in winter in Atlanta, I had to restrain myself from throwing everything I own into my suitcase. Luckily, I really don't love most of my clothes that much. As those of you who know me will agree, high fashion isn't nearly as important to me as comfy.

Even though they're still predicting that Gustav will hit us, I don't really believe it yet. Yes, I went around the house and looked every room up and down, trying to decide what things I would really, really miss if they were gone--needless to say, the list is relatively small, as we've only had three years to re-accumulate things.

As luck would have it, I have a trip to Atlanta planned for the weekend to see my sister. Currently, my mom, E and I are planning to drive to ATL on Friday and come back home on Tuesday. I guess we'll have to wait and see whether driving back to the Gulf Coast will be possible come Tuesday, but at least perhaps we'll beat the evacuation rush out of town if Gustav continues heading this way.
I know, I know, we're still at least five days out from landfall, but I think Gustav has all of us feeling a bit jittery. It didn't occur to me until last night, when talking with my friend Curtis about how unsettled this has made me feel, that this is the first time we've even had to discuss evacuating ahead of a storm since Katrina.

I am NOT going to worry about the two tracks that show Fay cruising over the Gulf before she makes landfall in Louisiana, with New Orleans in her northeastern quadrant. Nothing to see here, Fay, move along. And I'm sorry for making fun of your name, if that makes you feel any better. Fay is really a lovely name. God, how I hate the cone of uncertainty.

But for me, it's still there. It will always be there. Katrina was a death, and you don't easily just move on from a death. It was the death of my home, the death of the homes of those that I love. It was the death of my innocence--where before, I thought that, even despite our disagreements, we were all Americans, Katrina demonstrated that we were not. That there are those that hate us, simply because we're here. Because many of our citizenry are black and poor. Because we are "them" and not "us."

Three years on. Three years of despair, of anger, of disillusionment. Three years of being told that we're not good enough. Of comparisons to evacuees from forest fires who are treated to massages and live entertainment, as opposed to a people left on their own, to do the best that they could, with no water, no food, and guns pointed at them. Three years of emails about the self-sufficiency and resiliency of Minnesotans during blizzards. Three years of "finishing what Katrina started."

I don't want to be angry. I don't want to despair. I know what it means to live in a place where you can embrace life without turning your back on death. Here, we can be the yin and the yang, the light and the dark, the black and the white....

I just can't put into words how I feel sometimes. When I think about it, I can feel it well up inside of me, this giant ball of anger and hurt and disbelief. Ourselves alone. But why does it have to be that way? Why do we have to deal with the callousness of others, who haven't lived here and haven't experienced it? Why is our suffering less than that of an Iowa flood victim? Or an Oklahoman living in Tornado Alley? Or a Californian living where wildfires strike, year after year. Why, simply because we live in New Orleans, are we less than?

angst (ängkst) n. - A feeling of anxiety or apprehension, often accompanied by depression. See: New Orleans in August.
Posted by ALM at 10:38 PM No comments:

In my next life, I think I'd like to be the one that gets to choose the names of hurricanes. Does anyone else out there think that some of the names are ridiculous? I mean, come on--Fay? Paloma? And what about Dolly? It seems as if that name was chosen solely so that newspapers could run with a "Hello, Dolly" headline. I remember back in the late 70's (yes, sadly, I'm old enough) when someone at the National Hurricane Center decided it might be sexist to designate only female names, so now we have some masculine ones thrown into the mix. It seems that they also decided to spice it up a bit with some monikers with an international flair, thus Humberto, Henri, Georges, and Eduoard.

I, for one, will be anxiously awaiting the arrival of Hurricane Nana later on this year. Perhaps she can bake homemade cookies for everyone in her path and spawn lace doilies instead of tornadoes. At the time, I thought Katrina was a stupid name. I'm now considering myself lucky that we haven't had to spend the past three years talking about all of the destruction that Nana wrought.

If Nana threatens us, I'll be seriously irritated. If we get hit by another storm, I at least want it to be one with a more intimidating name--Hurricane Otto or Igor, perhaps.
Posted by ALM at 10:51 AM No comments: 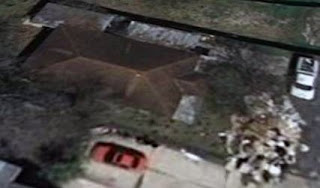 I was playing around on Google Earth today and plugged in our address. Up came this picture of our house taken post-Katrina, with all of our possessions sitting out on the curb. I guess that means Google hasn't updated its satellite photos since around December of 2005. Google Earth was how we originally confirmed that we had some sort of flood damage immediately after Katrina. The CNN reporter crusing around in a boat in the Sav-A-Center parking lot gave us a pretty good idea, but good ol' Google Earth left us without any doubts. Good times.
Posted by ALM at 3:43 PM No comments: 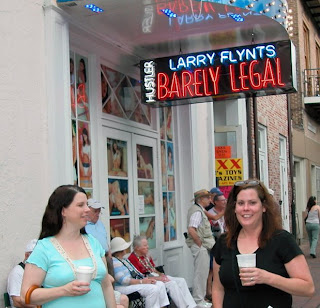 This is one of my favorite pictures. Not because it's a particularly good picture of me (I'm the one on the right) or my sister. And not because it's a particularly good picture in general (which, obviously, it's not). But how often do you get to see a bunch of senior citizens lined up--camping out, even--in front of Larry Flynt's Barely Legal Club? Pay no attention to the pictures of naked women behind you, grandma. Just keep looking forward. Taken during French Quarter Fest a couple of years ago, when one of the jazz band stages, was, unfortunately, directly across from the strip club. This picture always makes me smile, because it's definitely one of those only in New Orleans moments.
Posted by ALM at 4:07 PM No comments:

The Grass Is Always Greener

I have lots of thoughts floating around in my head but no clear focus, other than a longing for some semblance of a normal life that I know is pretty much impossible to have while living in New Orleans.

K was offered a position in Destin a few months ago, and we considered the idea briefly. But I think we both knew he didn’t have any real interest in it—my husband is a New Orleanian through and through. It was a very nice offer, but by the time we factored in the fact that my chances of finding a comparable job in that area were slim to none, we decided against it. Plus, the odds of selling our house right now in this market are, let’s face it—not real high.

Still, sometimes it’s tempting to put this city and its problems behind us. We briefly toyed with the idea of moving to Slidell—even went so far as to look at some houses on the market over there. But let’s face it—Slidell isn’t New Orleans. And despite how much house you can get for your money over there, and the fact that you can actually just walk into the local elementary school and enroll your child there—no waiting lists, no lotteries, and a solid, tuition-free education—neither of us could really stomach the idea of making that commute every day. And the thought of moving over there made us both feel like we’d be giving up, to a certain extent.

But sometimes I long to live in a place that’s well, for lack of a better word, normal. A place where the local newspaper isn’t running a seven-part series on a 17-year-old murder victim—because there are no such stories, as opposed to too many of them to count. A place where, as mentioned above, I could just walk into our neighborhood elementary school and enroll E. A place where the streets are paved and where people don’t have to find the humor in our atrocious streets by hosting birthday parties for potholes, planting flowers in potholes, posting “no lifeguard on duty” signs in potholes, etc. (All funny as hell, but I’d happily trade the humor for functional streets.) A place where we don’t need to have discussions about whether the mayor is a crook, is suffering from Katrina-related PTSD or just doesn’t give a damn. A place where I can still enter and exit the parking garage at work, even though we just had a heavy rainstorm, because the street isn’t flooded. A place where state senators don’t (allegedly) assault their girlfriends and then get lap dances. A place where our monthly electric bill isn’t comparable to our car payments combined.

At the same time, I don’t really want to leave New Orleans. I just want living here to be better—to be easier. The people of this city are what keep us all here, I think. The love of life that everyone here has, the love for this community. There is no other city like it—or at least none I’ve been to. Nothing can replace the sheer sense of joy I get from hanging out with both friends and strangers during a Mardi Gras parade. Or wandering around shouting “Who Dat” in the CBD before a Saints game. Or any of the other countless, wonderful and unique things and people this city has to offer. Again, sometimes I just really wish it was easier to live here. And I wonder what I can do—what role I can play, if any—to make our city better.
Posted by ALM at 4:10 PM 2 comments: